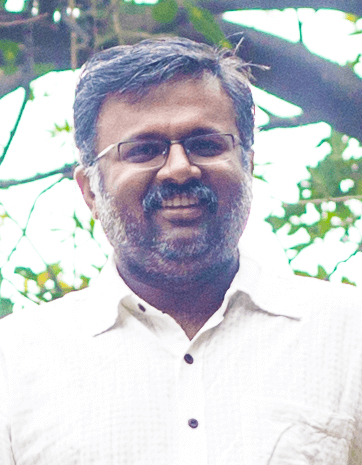 Recognised as a professional visual artist. Vinod operates as an artistic designer who communicates through various visual mediums and formats. In the last 20 years he has worked in the areas of graphic, print, motion, web design, photography, cinematography and animation.

Educated in Fine arts from CKP, Bangalore and in animation film making from the ZED Institute of Creative Arts, India; he also went on to pursue advanced character animation from AnimationMentor.com USA. He is best known in the industry as the creative director of the award winning short film project “The Cat and The Juggler”. Prior experience includes several creative positions at Maximage Sg Singapore, Basil Global, and Jadoo Works Pvt. Ltd, India. He also served as faculty at NYP Singapore.

Equipped with great experience in the digital media and immense knowledge of art, Vinod turned Entrepreneur by starting a creative enterprise called ‘Jagli Media Lab’ in the year 2013. ‘Jagli’ specializes in areas such as Transmedia Storytelling, Branding, Internet Presence Management and services which facilitate business development across a wide spectrum of visibility channels. Equipped with a Pre-production, Production and Post Production Studio, ‘Jagli’ has left a mark in the world of digital media through its Travelogues, Music Videos, Corporate films and Social Media Promos.
Having travelled extensively, Vinod has documented several cities across globe, countries including the USA, Europe, Middle East and China. He has worked across multiple dimensions for events such as the INK Conference in association with TED, Viveka Namana and Abhijna.

He has been collaborating with Abhinava Dance Company for several years building a visual identity for ADC across various visual formats.