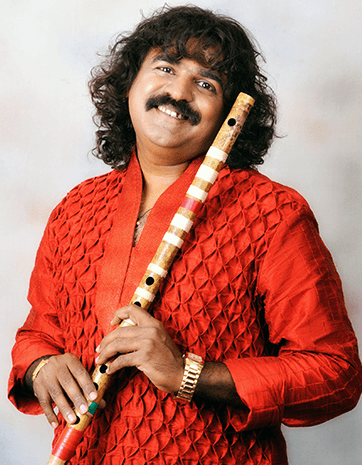 Pravin Godkhindi is one of the leading flautists & music composers of India. His gurus are Pt.Venkatesh Godkhindi and Vidwan Anooru Ananth Krishna Sharma. ADC’s first collaboration with Pravin was in 1999 with ‘Swar-Saakar’ - a unique dialogue of Flute with Kathak. His composition for ‘Varsha - Images of Monsoon’ won high accolades in India and abroad. ‘Tarang’ and ‘Ubhayaabhisaarika’ are his other works for ADC.

Apart from solo concerts at major musical festivals in India, he has also performed at various international venues such as such as Flutes Festival at Mendoza, Argentina as a solo performer. Pravin has also performed & collaborated with Western Classical, Jazz & Rock musicians. He has been honoured with the ‘Surmani’ Award by Sur-Singar Samsad Mumbai, Aasthana Sangeet Vidwan from Udupi Sri Krishna Mutt and acknowledged as ‘NAAD-NIDHI’ (‘National Treasure’) by the Kalachetana Organization. He is the first south Indian Bansuri artiste to be graded "A-Top" by Akashvani. He has also worked as a music composer for television & several National Award winning films. He is the first Indian to perform on the 8 feet contrabass flute, which he renamed as GOD's BANSI. He has performed with veteran musicians like Ustad Zakir Hussain, Dr Balmurali Krishna, Dr. Kadri Gopalnath, Pt. Vishwa Mohan Bhatt, Vidwan Kumaresh and others.